Just like Olympic judges, chemists have established a set of attributes that describe perfection so that we measure everything else relative to an impossible standard. The Ideal Gas is purely hypothetical; consisting of identical particles of zero volume with no intermolecular forces. This approach struck me as arrogant until I understood that Gas Laws that followed:

1. Graham’s Law: rate of movement is proportional to mass

2. Dalton’s Law: total pressure is the sum of individual pressures

The early chemists weren’t just Photoshopping. By imagining perfection, they found a way  to describe reality.

The reality of my upcoming exam pushed me to finish the final chapter which was Organic Chemistry, the study of compounds that contain carbon. These compounds are deemed ‘organic’ because carbon was originally obtained from the remains of living things, like coal. The carbon atom of today is the backbone of thousands of compounds that keep us warm, healthy, clothed, and together. Travel and romance would be nothing without carbon.

What makes carbon great is its four outer electrons that are able to form single, double, and even triple bonds. And bond it does, creating almost endless chains of molecules that are used to make fuel, medicine, textiles, and adhesives. The same atom is responsible for the diamonds in my wedding band and the gasoline in my car.

Maybe perfection and greatness are closer than I imagined.

Next up: The Last Lap

Look around – can you imagine how many chemical reactions are happening before your eyes at this very moment? Some materials are synthesizing and some are decomposing. Some compounds are swapping molecules and some may combust. Without these reactions and our ability to predict them, there would be a smaller staff at Downton Abbey, tonic would stay fizzy, nausea would last, and the New Year would be quiet.

The most important example of synthesis occurs when hydrogen and oxygen molecules combine to make water. This is as simple and profound as creation itself. A less inspirational example of synthesis is the formation of tarnish that occurs when silver reacts with sulfur in the air to make silver sulfide. Chemists call this 2Ag + S —> Ag2S and Lord Grantham calls it a steady job.

A sad example of decomposition is the spontaneous decay of carbonic acid (H2CO3) into carbon dioxide (CO2) and water. This is why that large bottle of tonic that you have been saving for the summer G&T’s may ultimately disappoint: H2CO3 ——> CO2 + H2O.

The most interesting reactions happen when compounds swap, or replace, molecules to form new substances. Hydrochloric acid (HCl) in the stomach makes us queasy until calcium hydroxide (Ca(OH)2) arrives. Oh what a relief it is when the acid is neutralized into two products that are much easier on the stomach: calcium chloride (CaCl2) and water,  2(HCl) + Ca(OH)2 ———> CaCl2 + 2(H2O).

For sheer drama, however, no reaction can match combustion. Fireworks are made with gunpowder that produces  heat and noise and metals that produce color. Copper shows blue, lithium and strontium red, and magnesium and aluminum are white when combusted. Combustion reactions produce much more energy than is required to start them and they need a lot of oxygen. Drama turns to danger when materials spontaneously combust, which happens when enough heat is generated by the reaction to ignite the materials at hand. This can happen with the right combination of microbes, moisture, heat and hay.

The laboratory of my life got a lot more reactive this week as I am making plans to use my favorite Christmas gift:  a Chemistry Set with enough equipment and reagents to conduct 333 experiments. My husband (aka Santa) has offered to help me set up an area in the garage and has even volunteered to be my assistant on the condition that I call him ‘Igor’. It’s all about the chemistry.

As with friends, families, and communities, the truly interesting behavior starts once bonding has occurred and the structure is in place. The relationship dynamic for electrons is called “Valence Shell Electron Pair Repulsion”, which is a term that will never be hashtagged ever. VSEPR means that once electrons have bonded to form pairs, they move as far apart as possible from other electron pairs. This gives rise to many different structures as the pairs jockey for space. It’s important to remember that these structures are three-dimensional even though we draw them with dots, arrows and equations.

For example, the molecule SCL4 has five electron pairs around the S atom which creates a Trigonal Bipyramid like this:

The molecule XeF4 has six electron pairs around the Xe atom which creates an Octahedral structure that looks a lot like the jacks that we used to play with: 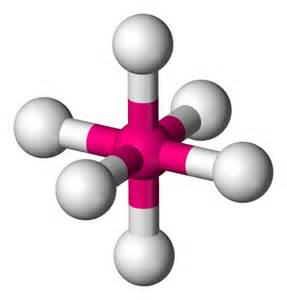 I learned 10 structures this week, ranging from the lowly Linear, Bent, and T-Shape all the way to the magnificent Tetrahedral and Square Pyramidal. I also learned that these bonds build more than just beautiful structures. The nature of the bond has a direct effect on the physical properties of the compound. Strong bonds cause high melting points, high boiling points, and low vapor pressures. I wonder what new materials are out there waiting to be created with just the right combination of structure and strength?

Tomorrow I am travelling to attend a conference about learning. I hope to eventually build just the right classroom combination, even though right now the areas of teaching and learning seem more like alchemy – all mystery and magic – and less like the balanced and predictable study of electrons that I find so comforting.

Next Up: Name and Number, Please

This week’s lesson was The Periodic Table. And with that sentence, I just lost most of my readers. Those of you still with me – imagine the vague underlying sense of discontent that haunted the chemists all through the 1860’s as they kept discovering elements, 63 in all, but without hope of reaching a greater understanding.

I used to work for a scientist who often said “Simple is best, unless it’s wrong.” Dimitri Mendeleev created the first Periodic Table simply and correctly by arranging the elements in ascending order of atomic mass. In doing so, he unlocked a powerful secret about those 63 and all that came after. The elements had a pattern and it was a pattern of eights.

Just like my new glasses, Mendeleev’s list made everything in the world a little clearer. The elements suddenly looked like neighbors, grouped together by common interests and behavior. Holes in the list were simply houses under construction waiting for germanium, gallium, and scandium to arrive.

This begged a much larger question: What other neighborhoods were out there and just how large was this city?

Next Up: Inside The Great City

I am going to need reference books and an occasional study hall, so I head to the public library in Clinton, Missouri. I find the Henry County Library on a gravel road one block off the historic square. As I pull into the parking lot I notice the Sheriff’s Office next door. I bet that keeps overdue books to a minimum.

The stern sixty-something librarian fits my stereotype perfectly until I notice the court jester tattoo that covers most of her right forearm. She patiently explains that my 15$ annual fee allows me 10 books and 4 dvds with an overdue fine of 2 cents/day. I complete the application, which requires a personal reference, and step inside the cool library quiet.

My first subject is The Scientific Method, aka The Engineers’ Gospel. It feels like catching up with an old friend. That is, an old friend who gives pop quizzes. I am reminded that The Method is nothing without Observation and that Observation is nothing without Measurement. Otherwise, we would still all believe in Spontaneous Generation and that frogs come from mud.

After two hours I am craving coffee, but YELP tells me that the closest coffee shop is 70.7 miles away. That feels as distant as my teaching career. Back to work.

I downloaded my study materials today. I even set up my course notebook, a time-honored tradition of hole-punching, printing labels, and sliding them into the little colored tabs. I indulge in some reminiscing and wonder – does anyone even make notebooks anymore? It’s been so long.

I watched the PTK Study Plan presentation, which is all about the test for PTK certification. It has 100 multiple choice questions (2.5 hours) and one essay question (1 hour). The test designers recommend deciding the answer for each question before looking at the choices, because half of them are “designed distractors.”

I decide to start with the Chemistry section instead of PTK because I want to have the content fresh in my mind while I learn to teach and, honestly, right now I’m a lot more comfortable with Chemistry.

Next Up: The Scientific Method

I visited the Marian Koshland Science Museum today in DC for inspiration and courage. She was a brilliant researcher and teacher in the fields of immunology and molecular biology and was devoted to improving public understanding of science.

I took a memory test (passed with flying colors), guessed the sugar amount in a variety of bottled drinks (barely passed that one), and tested the amount of energy wasted by conventional light bulbs. Nice and tangible.

So how will I communicate the invisible miracle of Chemistry? The elegance of the double-helix, the puzzle of the Periodic Table, the simple genius of The Pill, the universality of Avogadro’s mole, the heroism of vaccines?

My metro stop appears and I realize that I am way ahead of myself. First, I should download my study materials.